grimDARK: A Fistful of Ashcan Edition is here! In worlds of dark fantasy, grim prophecies, bad manners, cold tea, and constant rain, you and Several Others will go from Nobody to Somebody to Big Cheese, or die in assorted horrific ways. This Ashcan edition of the game is a stable beta of the real grimDARK experience.

grimDARK is a rules ultra-light tabletop RPG based on Graham Walmsley's award-winning Cthulhu Dark. It runs on a d6 dice pool system and a game can start in as little as 15 minutes. For an even lighter implementation, or to just try the rules before you buy, just search for grimDARK: So Basic A Nobleman Can Do It.

This Cthulhu Dark-based game is reflavored for dark fantasy, rather than worlds of Cthulhu Mythos horror. It also adds several layers of optional crunch and granularity, as well as whole systems of its own for combat, health, and intervention by the Hand and Wrath of God. Being inspired by years of exciting storygame development, this is the game that Graham Walmsley himself called "interesting stuff"!

We'll be bringing this beauty to Kickstarter in 2021 to fund improved art, layout, and general gorgeousness as well as editing, more and/or less words if need be, and all that good stuff. We also have print on demand copies on DriveThruRPG, for people who like physical books. Those can be found over here.

This Ashcan is play-ready, but is lightly edited first draft material and has suffered a number of humiliating playtests. (This is a joke, it's very playable and around 90% done, which is why we bring it to you now.) It currently reflects the most recent edition of the rules, formerly posted via the Eldritch Tomb Patreon leading up to the launch of the Kickstarter. We will also be introducing Ashcan Supplements, which may or may not be implemented into the final product via the Kickstarter. There's a lot going on behind the scenes, so we hope you enjoy grimDARK: A Fistful of Ashcan Edition.

UPDATE 12/09/2021: We have just added a new edition of the rules  - grimDARK: A Fistful of Ashcan Edition: Revised and Reloaded - For A Few Subtitles More: JAM EDITION! The exclusive rules update available for creators at the grimDARK GRIMmunity Content Jam is now free for previous owners of grimDARK, as well as all new buyers!

Not enough grimDARK for ya? Check out the grimDARK GRIMmunity Content License and make your own grimDARK content. Need a base? Take a community copy or check out grimDARK: So Basic A Nobleman Can Do It Edition. Get started in the Worlds of the Grimdarkening today!

In order to download this game you must purchase it at or above the minimum price of $14.99 USD. You will get access to the following files:

Support this game at or above a special price point to receive something exclusive.

BEHOLD! Free copies of grimDARK: A Fistful of Ashcan Edition for marginalized communities and other people who might need a free copy of grimDARK to temporarily relieve the grimdark from their own lives. Claim them for your own amusement and enrichment, no questions asked.

This is amazing — I love the art and the authorial voice!

(If you don't mind a proofreading note: p36 refers to Wizardry/Consecration/Sorcery as a "dichotomy" — that's specifically a two-way split, it'd be a trichotomy.)

And you are right and any excuse to use the word "trichotomy", which we just learned, is more than welcome. :) 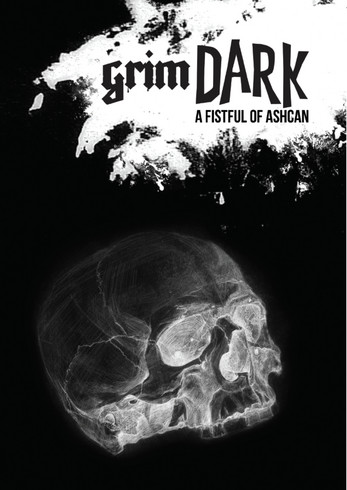 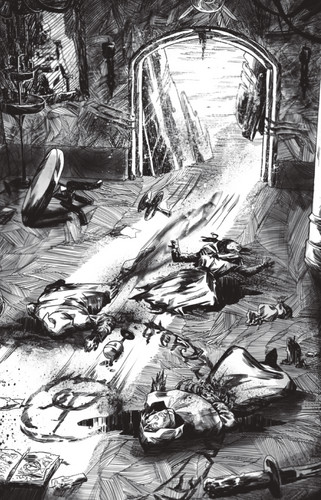 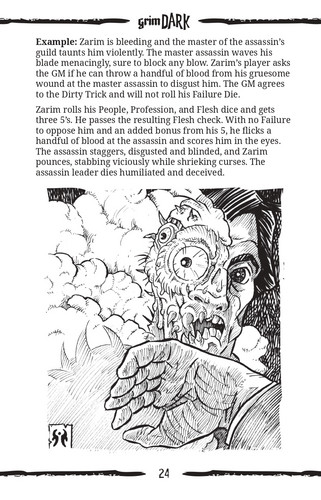 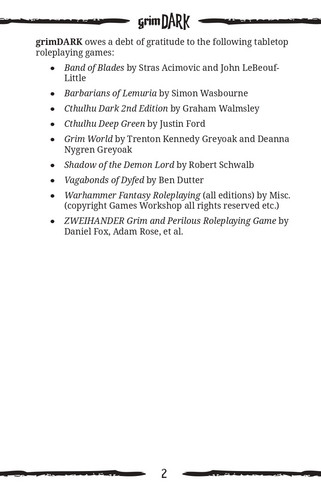 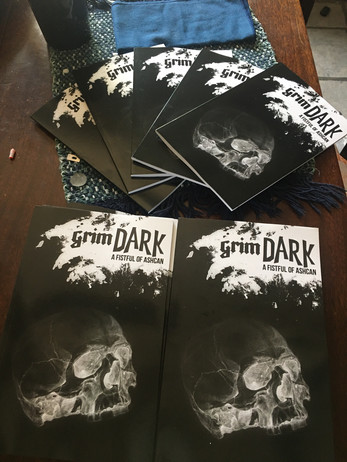